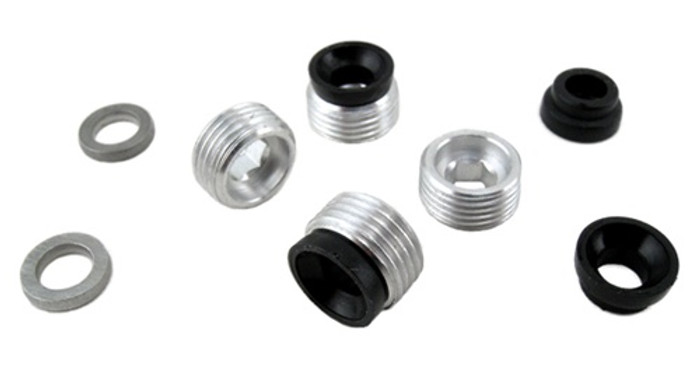 Until now, the only way to replace damaged or worn out pillow ball setscrews and bushing caps was to purchase new pillow balls as well. This was quite costly and frustrating since rarely do the stock pillow balls wear out. Our pillow ball setscrews and bushing caps were designed to help reduce costs by nearly half and eliminate the need to buy unnecessary parts! These setscrews and bushing caps are direct replacement parts for stock Traxxas Axle Carriers and RPM Oversized Bearing Carriers.
Associated MGT Owners: Stock MGT axle carriers have the same geometry as stock Traxxas T/E-Maxx carriers. The only differences between the two are in the thread size of the setscrews and the spacing between the bearings. This package takes care of those differences and allows Associated MGT owners to run RPM T/E-Maxx Oversized Bearing Carriers (#80031, #80032, #80035, & #80038) on their trucks. The small spacer is used between the two bearings in the axle carrier and the new RPM setscrews replace the stock MGT versions.
Tech Notes: RPM Pillow Ball Setscrews and Bushing Caps are packaged in sets (four setscrews, four bushing caps, and two axle spacers) enough to complete two bearing carriers. In order to complete all four corners of a truck, TWO packages must be purchased.
×