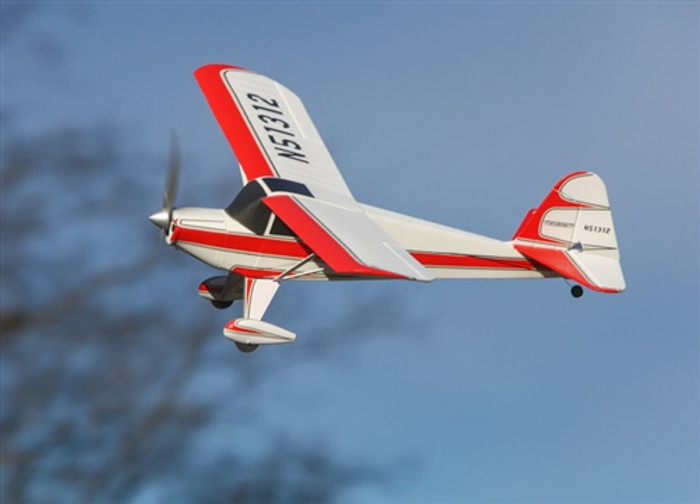 ***NEW***
Clarence Taylor, a self-taught aeronautical engineer from Nottingham, England, is considered one of the fathers of private aviation in America. He designed the original Taylor Cub in 1931 at Bradford, Pennsylvania, and along with his brother Gordon, formed Taylor Brothers Aircraft Corporation in Rochester, New York in 1926 with the slogan: "Buy Your Airplane Taylor Made." With a goal to build a personal aircraft superior to his original Cub, Taylor formed his own company in 1935 as Taylor-Young Airplane Company.

The Rage RC Taylorcraft is an ultra-micro sized model of Clarence Taylor's classic 1936 design, with a highly visible realistic trim scheme and details like pre-decorated wheel pants, and a convenient magnetic hatch on the battery compartment which provides convenient access and improves scale appearance. The model features a symmetrical airfoil design to enhance the scale appearance and provide smooth, stable flight performance either indoors in gymnasium-size buildings, or outdoors in light winds, and that's ideal for both aspiring and experienced pilots.

The Taylorcraft comes fully assembled as an RTF (Ready-To-Fly), so everything needed to fly is included in the box. As with previous Golden Age series airplanes from Rage RC, the 3-in-1 control board arrives factory-installed with proportional servos for rudder and elevator control.

Rage Propeller with Spinner for Taylorcraft Airplane, A1279

Rage Gearbox with Shaft for Beechcraft/Taylorcraft Micro RTFs, A1192

Rage Propeller Shaft with Gear for Beechcraft/Taylorcraft Micro RTF, A1194

Rage Gearbox with Motors for Beechcraft/Taylorcraft Micro RTF, A1193